Three other classic British SF shows to check out

The Adventures of the Everyday Fangirl welcomes Echo Ishii, who is the author of Mr. Rumple and Mr. Grimm, as a guest blogger today.  Take it away Echo… 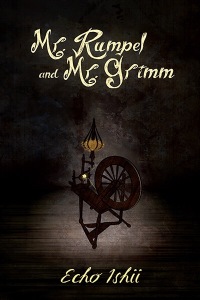 I am so excited to be blogging today at Everyday Fangirl. I’m Echo Ishii and I blog at Smart Girls Love Sci Fi, which focuses on SciFi Romance. My fellow bloggers are Charlee Allden and Riley. Each month we host interviews with authors, post book reviews, and do a Wednesday weekly round-up of Sci Fi romances.
I also do a column called SF Obscure twice a month on SF/Fantasy/Paranormal TV shows of the past. I started writing about them because many, people have fond memories of SF TV shows that influenced their love of the genre. Also, contrary to a common belief that SF is a ‘boy’ thing, I find that a lot of women follow SF shows, comics, and all aspects of fandom. My initial plan was to feature an actor in shows and intersperse it with reviews of more modern SF media. As I went along, I discovered that I loved revisiting old TV shows and watching them all the way through. I discovered forgotten gems (well, sometimes more duds than gems) and it’s become a real joy for me to do the SF Obscure column.

For today’s post I am going to talk about three other classic British SF shows that are worth checking out.

Blake’s 7: This is probably the least obscure of the bunch; however because it has not been licensed in a US DVD format (as far as I know) I am surprised at the number of people who have never heard of it. This is a shame. For those who have not seen Blake’s 7, it starts with a man named Roj Blake who had been brainwashed and slowly regains his memories of being a freedom fighter against the oppressive galactic government.. Once he regains his memories his is falsely framed for horrible crimes and condemned to a prison planet. On the way he meets his soon-to-be compatriots- Vila, Jenna,Gan, Avon- and they acquire an powerful AI ship, called the Liberator. They are later joined by a telepathic freedom fighter named Cally and head off with Blake’s plan of somehow overthrowing the Federation. Blake’s 7 has often been referred to as the anti-Star Trek. Instead of a Federation that unites we get one that oppresses; instead of a crew that works together we get random criminals, mercenaries, and traitors willing to sell each other out and constantly at odds; and there is no guarantee of a good ending to it all. Ignore the dated hairstyles, budget special effects, and occasional questionable plot lines-it’s overall good stuff. The final episode is a classic. Watch it all the way through.

Sapphire and Steel: It’s the story of two agents called Sapphire and Steel. It’s never quite clear what Sapphire and Steel really are. Not human, possibly alien, and perhaps not even corporeal and these bodies are merely hosts. In any event it is the job of these hosts to fix problems with time. Time travel? Not always and not exactly. In Sapphire and Steel time is a thing that can be broken into or messed around with or altered. There are things outside of time that can break in or cause harm. And sometimes time slips into other times and begins to overlap. Yes, it’s vague. And it’s strange, but it’s a wonderful show. What keeps it going is the fact that the stories are good and the acting is top notch. With a small budget and minimal effects it’s still an engaging story-that’s what good acting does. It starts slow. If you are used to fast-paced action this may not be the show for you. If you don’t mind slow, thoughtful show with almost a stage play style, Sapphire and Steel has some real mind treats.

Star Cops: This is very rare and very obscure. I lucked out in having someone else tell me about it and I am not sure it’s readily available. I mainly point it out because of its concept-a true, hard SF show about astronauts and the international space station. That’s not done often, and for that alone it may be worth finding. Star Cops is set in the future-2027- in which there are five permanent space stations surrounded the Earth, Moon, and Mars. Space travel is common, with governments and private enterprises exploring the Solar System. The International Space Police Force (ISPF) is given the job of handling criminal investigations that concerning the space stations. Most of the crimes concern industrial espionage, scientific hoaxes, rival space based tech corporations. It’s a neat show that dwells into the competing views of what space explorations means; the rivalry between companies and the large amount of money at stake; and just plain old human flaws.

I always welcome suggestions for shows to cover. My next post at Smart Girls is Thursday, March 3. Feel free to join in the conversation.

Echo Ishii loves talking about SF. She also enjoys all manner of SF Romance, space opera, and such. I frequently re-watch Babylon 5, Star Trek, and Blake’s 7. She is a Star Wars fan too. Her current SF/Paranormal watch list includes Continuum, Orphan Black, Penny Dreadful, and The Expanse. She has one published novella, M/M fantasy romance Mr. Rumpel and Mr. Grimm with more writing in the works.  You can follow her on Twitter: @mrsbookmark or Pinterest: @mrsbookmark as well.