Welcome to the second in a series of interviews with Fanboys who Support Fangirls.

Today, The Adventures of the Everyday Fangirl interviews Fanboy Ryan Stampfi about his efforts to support Fangirls like myself. 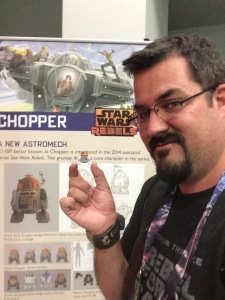 Thank you so much Ryan for stopping by The Adventures of the Everyday today to let us know more about you and about your efforts to support Fangirls!

What fandoms are you a fanboy of and for how long?

I’ve been a Star Wars fanboy since as far back as I can remember – my older brother made sure I grew up knowing the important things. Superhero movies, comic books and so on – my cousins and I all knew the Christopher Reeve Superman movies and the Adam West Batman show and had the DC action figures in the early 80s from those properties. We had the Star Wars figures also and like most kids back then we made up our own adventures for Han, Luke, Leia, Chewie and whoever else we had. I had an Ewok who played a crucial role in many galactic adventures as well as a TIE Fighter pilot that spent a great deal of time underwater (bath time, the beach etc.) – Lego was something I can’t remember not having – again, older brother n sister hand me downs and in the past 10 years I’ve been collecting and loving the heck out of the Lego Star Wars line.

I’m also a gamer, not an amazing one, but I am persistent! My all time favorites are the 90’s Lucasarts games like Dark Forces and the various X-Wing and TIE Fighter titles. Between GOG.com (Good Old Games) re-releasing the Star Wars flight sims and acquiring a new joystick after my old Microsoft Sidewinder became to loose and wobbly to enjoy the games I’ve been playing the old sims again. Great fun and with Star Wars Rebels and Rogue One coming out it’s fantastic to play the games set in that era again. I play Battlefront on Xbox Live also but it’s just repetitive online matches – gorgeous and great fun, but I crave the story based style that the Lucasarts games were famous for…

When did you first learn about Fangirls?

I’ve known fangirls for years – nerds can usually spot their own and you find out who like what if you listen. I guess with the fairly boy-centric marketing of Star Wars in the past and having a sister who claims to have never seen a Star Wars film in it’s entirety and the girls I hung out with in high school weren’t my kind of nerdy – but everyone has their thing. However, I did marry a fangirl and in turn we have one of our own.

My wife Sarah is an old school Sierra Quest gamer – if you know the Quest for Glory/Hero Quest series of games it’s a safe bet she knows them better. Sarah and her younger brother also introduced me, albeit with great reluctance and resistance from me to the Harry Potter series. When the first movie came out I went with them and their parents to see it and I was hooked. I got caught up with the books very quickly and Harry was everywhere back then in the early 2000’s. I do miss the chocolate frogs. But I read the books with Sarah as they came out – we’d usually go into spoiler lockdown and go to the farm to block out the world until we each finished the new book and then picked them apart – the Potter podcasts like got me really got me into the medium.

Our daughter, Riley, is a huge Potter fan, I’ve read all 7 books to her and she’s been loving the new script to the Cursed Child play, that was a great story. She loves Star Wars too, surprisingly a big Darth Vader fan but loves Rey and Ahsoka most of all.

I’ve learned about great franchises from Fangirls, I had heard of Douglas Adams’ Hitchhikers Guide to the Galaxy before, but it was a true fangirl that got me to try it – and it’s definitely my kind of crazy, I quote it a lot.

Who are the Fangirls you support?

Big fan of the Fangirls Going Rogue podcast and I’m so glad I got to meet them in Anaheim last year, but I’ve come to know many through social media of all ages, costumers, gamers, artists, podcasters, writers and just fans in general with a great take on things. Being the dad of a fangirl I’m very supportive of strong female characters in film, books, games etc. and not to just for my daughter’s sake – honestly I’ve found in games I often prefer a female character and in a lot of the fiction I read (I’m a fiend for audiobooks, I’m on the road a lot) I am far more likely to be engaged in a story with a female protagonist. I’m closing in on 40 years old but for some reason I’m still drawn to a lot YA books by female authors, I think it’s the genuine emotion and feeling that everyone can relate to… or at least I think everyone, I do.

What do you do to support Fangirls?

Social media is great for this for me – I live in a small town in a remote part of Western Australia so almost all of my fan friends are far from here. There are a bunch in Tasmania I’d love to meet someday – the awesome ladies from the Thylacine Squad of the 501st Legion are fantastic and do some much for others through their costuming and like yourself Patty, most of my fangirl friends are in the USA etc. so social media and podcasting is how I usually interact with them. Anyone can like and share posts and it’s great that you do – but anyone can also go the extra and give encouragement and feedback this way too. It’s a community after all.

Supporting my main fangirl, my daughter Riley is great fun – the Star Wars and Harry Potter stuff, the gaming and in the past year or so I’ve been helping her emulate one of her favorite Disney Princesses – Merida! I’ve loved archery all my life and since high school I’ve shot bows for real and when we believed she was ready we got her a bow of her own and she loves it. It’s a great skill. Also encouraging her to try anything is important, after school Riley’s week is full of activities like coding, dance, cub scouts (in Australia scouting is not gender segregated, so this is actually a great way to knock some sense into the boys from an early age that girls can do the same things just as well), tee ball (also not gender segregated) and drama classes.

How has social media helped or hindered you in this effort?

I can’t think of a way it’s hindered me, helped – so much, I wouldn’t have made so many friends and found people whose lives, hobbies and work I follow and interact with otherwise.

Anything else you want to say to others about being a Fanboy who supports Fangirl?

We’re all the same and different. There really isn’t a “that’s a boy thing” or “that’s just for girls” anymore – or before, ignore the marketing. I saw a video the other day of an 8 year old girl who picks apart the messaging on kids clothing in the store – she’s trying to figure out why the girls clothes had things like “Hey!” and “Gorgeous” written on them and the boys shirts next to them had “Adventure!” and “Think outside the box” written on them. Boys can love Disney Princesses and girls can enjoy getting covered in fish guts on the boat, it’s stupid and counterproductive to pigeon hole and limit people from a young age. Character’s like Rey in The Force Awakens have done so much for breaking the “this is a boys thing” stereotype. I love it, I can’t wait to learn more about Jyn Erso in Rogue One, I can already tell it could be my favorite movie ever.

Thanks again Ryan for joining us today! I know personally, I really appreciate your support for this fangirl!
###

Also, please check out the travel adventures with his Lego Star Wars droid, Chopper on ‘Travelling Chopper’ on Facebook and @ChopperC1_10P or #TravellingChopper on Twitter. It was brilliant having ‘Travelling Chopper’ represented by the Everyday Fangirl, Patty, and her Husband, Michael, as they travelled to Star Wars Celebration London this year! He’ll be making his way to the USA without me very soon and bouncing around friend to friend for photos – he’ll have a full passport for sure!!!