I do not have a passion for cooking and baking in general. However on Thanksgiving and other holidays, I have a traditional dish that I make and share. The dish is a cheesy potato casserole that is a variation of a recipe found in many magazines. 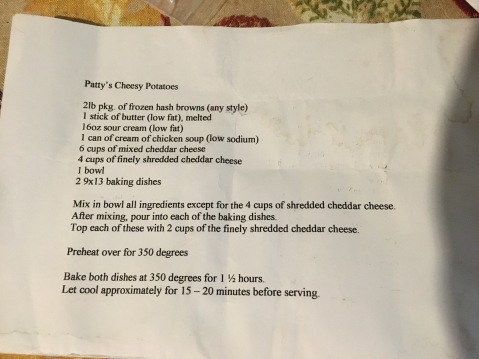 I tweaked the original recipe a bit because my husband has a food allergy and a few ingredient preferences. These tweaks include using Southern Style hash browns instead of the normal hash browns, not adding onions and adding extra cheese. I also use low fat and low sodium ingredients where I can.

There is not much prep needed for this dish, one bowl and a mixing spoon, and the task can be done and in the oven within 20 minutes. In addition, because of the tweaks I made, the mixed ingredients fill two casserole dishes instead of one.

I am very proud of my cheesy potato dish especially since my Dad and friends believe that my tweaks make it better than the original recipe. As a result, I been making this dish for over 20 years.

So do you have a traditional dish you make for holidays like Thanksgiving?