Interview with a Fangirl: Clair

I am continuing with my series of interviews with Fangirls that I have met through social media! 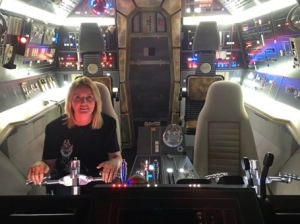 Today, it is a great pleasure to interview fellow Fangirl, Clair Henry aka @henrytowers on Twitter.

I became aware of Clair through the Star Wars Fan Community.

When do you realize you were a Fangirl?

I probably I realised I was a fangirl when I went to secondary school around the age of 11 years old; (I think it’s called high school in the USA). Whilst at primary school (elementary school) I had a group of friends mainly boys who each break and lunchtime played or talked about star wars mainly, but we did like other things such as Battlestar Galactica, Flash Gordon, Superman and Wonder Woman anything sci fi, fantasy or comic based really. I loved it we played role play games, looked at comics, played with the toys, read books, collected the trading cards and stickers you name it we did it!

When I went to an all-girls secondary school and had to make new friends I realised that not many people liked the things I liked! It didn’t stop me; it was difficult though as in the early 1980s in Northern Ireland it was hard there was one comic shop in Belfast that you could go to get your fangirl (or guy for that matter fix! It was so expensive!!!!!)

All through my life I haven’t ever shied away from the fact that I like Star Wars or anything related to sci fi and as people have got to know me they accept it think its quirky and respect me for it!

I’m still best friends with my primary school friend, now his family and mine go together to conventions!

How has social media helped or hindered you?

I would say it has helped me. I loved StarWars.com from its infancy and joined hyperspace on it! The forums and communities before modern social media helped me keep up to date or in contact with other people who loved star wars.

I am now on facebook, twitter and instagram. I find twitter the best for finding out snippets of information from a range of sources almost as soon as it happens! I love the fact on facebook groups of like-minded people can come together and chat.

I try to look at them a couple of times of the day, but try not to let it take over my life which I know social media can do, it’s very addictive!!

When did you first see Star Wars or other favorite fandom, such as Star Trek, Lord of The Ring, etc. and did you love it right away or did this grow on you over time?

My parents always said I loved strange TV shows and movies from a young age, I saw Star Wars in 1978 when it came to Northern Ireland when I was 5 and I loved it! My mum always tells people when they ask her “Has Clair always loved Star Wars?” Her reply is “Yes when her dad and granddad brought her home from the cinema and she pretended to stop a rubbish crusher from closing in on her and called herself Princess Leia I knew this film was a hit !”

I remember choosing to watch Star Trek, Battlestar, the black and white Flash Gordon Saturday morning shows, Wonder Woman and the cartoon Lord of The Rings over anything else on the TV I simply couldn’t get enough of it!

That love has still continued I love to watch anything of the fangirl genre from lost, the remake battlestar, Game of Thrones to the dc and avenger films and tv shows over anything else.

What have you learned from the Star Wars fan community or other fan communities that has had a positive impact on your life?

It was different for a girl to like Star Wars when I was young it was a “boy” thing and there weren’t many “out” fangirls around. I was considered by some to be nerdy, Tomboyish and weird as I didn’t conform to the norm as such in my tastes, but I was always comfortable and strong with my choice and that was because of the support I got from the Star Wars friends I suppose you could call them my fan community right from the start as a child
As an adult, the fan community has allowed me to continue my love for star wars and has helped me show others that its ok to like what you like and be proud of it ( even when it’s not trendy or in vogue which star wars was for a very long time)

What else do you Fangirl about?

My daughter loves Harry Potter so I have learned an awful lot about that series recently. Its great to see Supergirl and Wonder Woman come back again! I loved the original program and movies and think the modern take on those are fantastic!

I’m not sure whether it’s a fangirl thing but I love Kylie Minogue the pop singer and have yet to miss a tourher music I find is very upbeat and always gets me on the dance floor!!!

Anything else you want to say to others about being a Fangirl?

I love being a fangirl as there isn’t a typical or prescribed way to do it! I love the fact that every day I can somehow show off my love of Star Wars in my own fangirl way whether it be by wearing a pin on my work Lanyard, heading out for a night of cocktails by carrying my Star Wars makeup in my black Darth Vader handbag, or turning up to a meeting and produce my Star Wars note book and pen to take notes and minutes. It always starts a conversation and I feel it breaks down a lot of barriers as people can’t help but ask why or do you like Star Wars!

Being a fangirl is simply the best feeling and I am so proud to call myself one.

May The Force Be With You…