Interview with a Fangirl: Jessie

I am continuing with my series of interviews with Fangirls that I have met through social media!

Today, it is a great pleasure to interview fellow Blogger, SWTOR Gamer and Fangirl, Jessie Stardust. 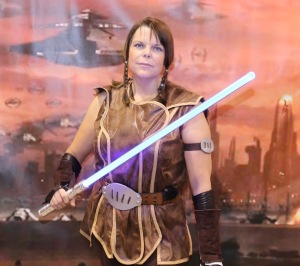 I became aware of Jessie through the Twitter Star Wars Fan Community.

Welcome Jessie to The Adventures of The Everyday Fangirl. It is an honor that you took the time to answer these questions about being a Fangirl.

When do you realize you were a Fangirl?

I didn’t realize or maybe accept that I was a fangirl and a nerd until later in life. I had always loved Star Wars– a LOT- but until I started playing a Star Wars video game, I never really saw myself as anything other than just a plain old fan. My realization hit me after 30!

How has social media helped or hindered you?

Social media, namely Twitter, has helped me immensely! It connects people with similar interests and fandoms and geekerytogether and accomplishes a couple of important things: 1- Gives me a sense of community and belonging, 2- leads me to all sorts of really cool stuff I might never have found on my own.

When did you first see Star Wars or other favorite fandom, such as Star Trek, Lord of The Rings, etc. and did you love it right away or did this grow on you over time?

I saw Star Wars (you know, before it was called A New Hope) in the theater at release with my mom. I recall it vividly. I can say it’s one of my top childhood memories. I recall the sound of the Stormtroopers boots on the gleaming floor, the way Leia wore her hair and how Luke swung across the dangerous gap with her on his hip almost as if they were my OWN memories and not those of a film.

What have you learned from the Star Wars fan community or other fan communities that has had a positive impact on your life?

I have learned that we all have something to offer. Many of us write, draw, edit screenshots, make fan videos, do podcasts, stream gameplay, etc. I think being a megafan pushes you to express your love in creative ways and helps you tap into your unique talents. Being surrounded so many others having these experiences makes a rich community full of creative energy.

What else do you Fangirl about?

I love Tudor-era English history and I fangirl about Anne Boleyn. I am a huge dog fangirl as well!

Anything else you want to say to others about being a Fangirl?

I think it’s been a wonderful way to connect people from diverse situations, across the globe. Men, women and children of all religions, political affiliations, and social backgrounds can find things to love together, debate and theorize wildly about. On a personal level, I like having a safe escape, an alternate galaxy that makes more sense at times than the Milky Way. The stories are parables that can teach us what it is to be a hero and to make choices for the good of others, to stand up to evil where we see it. The books, films, games, music, LEGOs and all of the other wonderful Star wars stuff is soothing and gives me happiness. I find going back to them can be like a touchstone in anxious or trying times.

Thanks again Jessie for stopping by today and letting us get to know you better!

You can learn more about Jessie by following her on Twitter, @unholyalliances, or visiting for blog, tatooinedreams.com.

One response to “Interview with a Fangirl: Jessie”