It is a pleasure to welcome Corie Weaver editor of the Sci-Fi Anthology series, Young Explorer’s Adventure Guide. 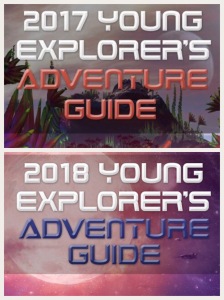 Welcome to The Adventures of the Everyday Fangirl and thanks so much for taking the time out your busy schedule to help us get to know more about the Young Explorer’s Adventure Guide!

We chose the name Young Explorer’s Adventure Guide because we wanted to create a sample of science fiction stories for readers of all ages. Every collection includes stories that represent the wide spectrum of science fiction, from rocket ship adventure, to weird west to post- apocalyptic to steampunk and more.

A random conversation with a friend back in 2014 sparked a new multi-year project – so be careful! My best friend was looking for new books for her young daughter. The qualifications seemed simple: Science fiction or fantasy, female protagonist, no romance. It was harder to find titles than I thought it would be. Sure, there were options – Wrinkle in Time, Zita the Space Girl, The City of Ember…. But not as many as I’d assumed. Turns out, according to a 2011 study of 6,000 children’s books, only 31 percent had central female characters, and even fewer featured main characters of color.*

I love science fiction. I believe it can bring us to a brighter future. So, I did the only logical thing, and put out a call for submissions for an anthology of science fiction shorts for middle grade readers, with a focus on diversity and representation. Girls, boys, robots – everyone is welcome here.

* “Gender in Twentieth-Century Children’s Books: Patterns of Disparity in Titles and Central Characters.” (http://gas.sagepub.com/content/25/2/197.full.pdf+html) The results of the study are also discussed in this Guardian article: (http://www.theguardian.com/books/2011/may/06/gender-imbalance-children-s-literature)

What are you a fan of and is this reflected in your writing or the writing of the authors of the series?

Tamora Pierce, Isaac Asimov, Usula K. LeGuin, Terry Prachett, Neil Gaiman – the list goes on and on. But one story I read in Asimov’s Magazine *mumblemumble* years ago has stuck with me for years – Beggars in Spain, by Nancy Kress. I reached out to Nancy when we started the anthology project, and she’s sold us a story every year. When I asked why she was such a strong supporter, she answered:

“When I was a child, the school library had a Girls’ Section, which included fairy tales, and a Boys’ Section, which included all the science fiction. Things have changed, of course, but not enough. There is a strong need for science fiction, as opposed to fantasy, aimed at girls, especially in the middle grades. This anthology is an important contribution to the effort to fill that need, and I’m delighted to be a part of it.”

If someone is interested in learning more about the Young Explorer’s Adventure Guide, where would they go?

The 2018 collection will be on Kickstarter starting June 13th, shipping in December.

Also, the 2017 Young Explorer’s Adventure Guide is now available via Amazon and Barnes and Noble. It is also available for Libraries! Learn more at http://dreamingrobotpress.com/2017-young-explorers-adventure-guide/!