Today is Force Friday II and I spent most of my day looking and buying some of the new Star Wars merchandise. 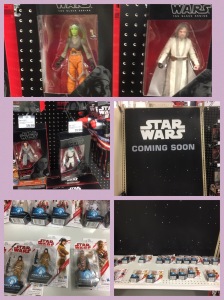 Since I had to work today I was not able to go to any of the Force Friday II midnight opening events. However, I was able to stop by my local Meijer on the way to the office. This store was in the process of setting things up for Force Friday II. Fortunately, they did put out a few of the action figures so I was able to score a Black Series Thrawn, Jedi Traninee Rey and Hera Syndulla!

Afternoon Adventures: At The Mall

Fortunately, the office closed early for the holiday and I was able to do some looking and shopping at a mall near my office. My first stop was a quick stop at The Disney Store since this was the closest to my office. This had the appropriate atmosphere for buying Star Wars merchandise including a video screen playing Star Wars scenes and clips, tracks from the Star Wars soundtracks and demonstrations by the staff showing the new mechandise to younglings! It is here that I bought my first Porg, a very soft PLUSHIE, a Die Cast Rey figure and the Die Cast droid gift pack on clearance! I also received a bonus, a set of the new The Last Jedi posters! 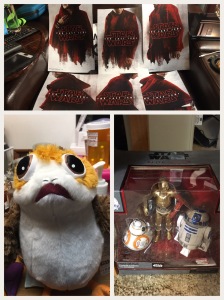 Afternoon Spoils at The Disney Store!

Next I decided to make a quick stop by there was The Lego Store, since this was only a couple of doors down from The Disney Store. I personally did not see much in the way of new merchandise that I wanted to buy. However, I saw a few displays that interested me including a display of The Phantom II from Star Wars Rebels, The Arrowhead from The Freemaker Adventures and a huge Millennium Falcoln!

Some of the displays in The Lego Store

The last stop at the mall was at The Apple Store.  Here I saw the new app enabled droids including BB-9E and R2-D2.  There was also a STEM learning opportunity where they presented a class for kids on how to program these droids using coding techniques!

Droids and Demos at The Apple Store

After dinner with my family, I made two additional stops to check out what other new Star Wars merchandise is available!  I first made my way to Target where I found lots of new merchandise available! There was so much I could not decide what to buy with my limited budget. I bought the new Forces of Destiny Sabine figure, a Rose figure and a few Star Wars items to give my hubby for his upcoming Birthday.

So much Star Wars goodness can be found at Target

My final stop of the day was at Walmart! Since I already spent my budget at the other stores, I did not buy anything here.  However, this did not prevent me from looking and adding new items to my list once I save a little. What I found while looking around was more new merchandise including some exclusives not found at other retailers.

Lots of stuff available at Walmart

﻿Well that was how I spent Force Friday II.  So how did you spend your Force Friday? Which retailers did you go to? What did you buy?
﻿