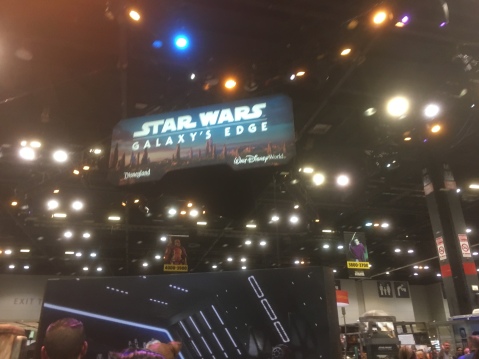 During Star Wars Celebration 2019 in Chicago, one of the most popular booths was the Galaxy’s Edge preview.

I took the time on the first day of Star Wars Celebration to experience what this booth had to offer as a preview of this exciting new Star Wars themed park.

Photo ops of rides and settings

They had photo ops available where attendees could have their picture taken with a mock up of the ride attractions and Black Spire backdrops.

The most interesting part of the booth to me was the examples of the merchandise that will be on sale when Galaxy’s Edge opens. All I could think of was…

I have to wait until the park opens to buy these! Why are they not for sale NOW!

The booth also hosted meet and greets with Imagineers who worked on creating the attractions for Galaxy’s Edge. Unfortunately, none of the Imagineers were available when I visited the booth. However, my friends Richard and Sarah from Skywalking Through Neverland were able to meet and interview Imagineers Scott Trowbridge and Chris Beatty and that interview is available to view above.

Overall, this Galaxy’s Edge preview gave me an general idea of what to see and experience when the park opens later this year.