It is a great pleasure to welcome Kayelle Allen author of Antonello Brothers series.

Welcome Kayelle to The Adventures of the Everyday Fangirl and thanks so much for taking the time out your busy schedule to help us get to know more about you and your stories better!

Bro is a prequel to the Antonello Brothers series. The brothers were separated when Senth was born, and until Senth was eighteen, he didn’t know his older brother existed. Khyff had spent his life hating his younger brother, because his mother abandoned Khyff to save Senth, and he never saw her again. When he finds out Senth is alive, he is single-minded in his decision to find out what happened to his mother–and kill Senth. Since this book is a prequel to the two sci fi romances where the boys find their forever loves, you know Senth doesn’t die. But why not? What happened that brought these two together? And who was instrumental in orchestrating it? There are secrets everywhere and that’s the real story behind Bro.

Once I have the name of the character, I have their backstory and history. It’s weird. For me, the name ties up everything. I once had an editor suggest I change the name of a character because she felt it didn’t sound “sci fi” enough. I’m sure that works for some people, but not for me. Once I know that character’s name, that’s it. In the case of the editor, what she didn’t know was that the character had already been in three published books. Fat chance of changing it then!

I’ve been a sci fi fan since I was a child. My parents always had those types of books around and I was an avid reader. We watched things on TV like Twilight Zone and the Outer Limits. I grew up with Star Trek and all the other classic sci fi shows. I watched westerns as a kid too, but that’s not even close to my favorite genre. I also love suspense and Regency romance.

You think there are sane writers? That’s so cute. None exist in the crowd I hang out with. Most of my author friends could buy that poster that says, “Writing is cheaper than therapy.” My characters deal with all sorts of issues. Let’s see… Pietas, my immortal king, won’t lie. Ever. He’s a pathological truth-teller. Luc Saint-Cyr, who’s in every book in the Antonello Brothers series, thinks of himself as a monster, yet he’s one of the kindest people you’d ever meet. That said, if you mess with his adopted son, Senth, he will have no mercy. Senth is half-human and half-feline humanoid Kin, and he’s grown up being bullied. He handles it with humor and by pranking people. He’s a blast to write. I really don’t think any of my characters are what you’d call “normal” people. Real people are far more interesting. Which would you rather read about? A guy who always does the right thing because that’s what’s good to do, or one who does the right thing because deep down, he fears if he doesn’t, he’ll revert to being a monster? A person with layers and issues is always going to offer the best bet for a great story.

I subscribe to magazines, which contain more current info than books, including Astronomy, National Geographic, and Discover. I watch a lot of sci fi and futuristic movies. I read fiction books for fun, but also to study the styles of other authors. My biggest research lately has been in the writing field. I discovered a program called Save the Cat! which revolutionized how I plot books. I have a new Antonello Brothers book in progress now, using that system. It’s so much easier to see where the story is going using it. I probably bought more writing craft books this year than I did fiction, and I buy a lot!

Wry and ironic humor. I’m not a fan of sitcoms. Most of the humor is forced. Stories written trying to be funny. To me, laughter comes out of a twist of ironic fate. I love Jackie Chan movies because the funny parts are where he is reacting to being smacked or hitting something too hard, or figuring out how to grab the nearest anything to defend himself. He’s the clown prince of martial arts, and his body language is what tells the story and makes it funny. He doesn’t rely on dirty words to get across what he’s trying to say. It’s not a violent attack — it’s ingenious defense. I think that’s what makes his movies funny. They’re fast-paced studies in irony. I laugh my head off watching them. Same thing with the original Pink Panther movies.

Injustice and bigotry. I wish people would leave others alone and let them live their lives. Go do you and leave everybody else alone. You don’t like their lifestyle? Don’t live it.

I love art and I use it to inspire myself as I write. Visit my website and you’ll find oodles of images of Pietas, portrayed by a Russian cosplayer named Nik Nitsvetov who cosplayed my character for me last year. Nik is currently creating the uniform and weapons for Pietas and later this summer, he’ll portray him again. You can find out when and where to see it by reserving your spot here. https://landing.mailerlite.com/webforms/landing/r4x1j4 Once you sign up, you’ll have an option to join an additional group or only hear about the cosplay.

I’m writing A Stolen Heart, which is set when Senth is three years old. It’s why and how he came to be adopted by Luc. The cover shows him as a cute little boy with curly hair and big blue eyes, which have the slashed pupils of a cat. I can’t wait to release this book. I’m about to write the finale.

I answer email and respond to comments on social media. All my contact info is listed on my website. I call it my homeworld, because everything I do originates there. https://kayelleallen.com

You can also find me through the following: 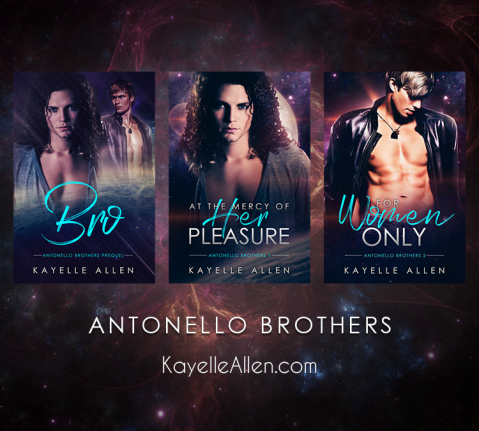 Where can we find more info about your books?

The Antonello Brothers series is available on Amazon, in Kindle Unlimited. The links below will take you to the Amazon for your region of the world.

At the Mercy of Her Pleasure https://books2read.com/u/m2o9P1