The Adventures of The EverydayFangirl welcomes back Author EG Manetti to discuss another story in the The Twelve Systems Chronicles.

The series title, The Twelve Systems Chronicles, is intended to convey epic science fiction with a heavy dose of space opera. The tag line—Where duty and passion collide—brings in the passion, romance, and suspense. I hope.

I love this question. The character names come from many sources; family, friends, my erratic muse. Some are deliberate choices based on meaning. Others are simply names, although I try to pull from the full range of cultures as I do for my characters.

With my heroine, Lilian; it was her name from the first. I have no idea where it came from or why it is spelled as it is. The same is true of the names for the Twelve Systems’ deities—The Five Warriors and Adelaide—they and their stories emerged from my psyche full-blown.

The alpha-male hero took some time to settle. I wanted something that evoked the ruthlessness and warrior culture of ancient Rome, but also Rome’s commitment to law and order. According to Behind the Names, Lucius is a ‘Roman praenomen, or given name, which was derived from Latin lux “light”. Two Etruscan kings of early Rome had this name as well as several prominent later Romans, including Lucius Annaeus Seneca (known simply as Seneca), a statesman, philosopher, orator and tragedian.’

For Lilian’s little sister, Katleen is a variation on the name of my best friend since childhood.

For the spymaster, Trevelyan, I wanted a foil for Lucius. I went with the British Isles where the Romans struggled to gain and hold territory. Again, Behind the Names helped me out: from a surname which was derived from a Cornish place name meaning “homestead on the hill”.

I have always loved science fiction. As a young reader, I lamented the lack of romance in otherwise great stories. When Science Fiction Romance emerged in the 90s, I loved it. But I wanted something more, something with the epic nature of Dune, but with the central character a female. To make this happen, I had to defy the romance central convention the primary couple ending the book with a Happily-Ever-After, or at least, a Happily-For-Now.

All the books end on a positive note, but the relationship between Lilian and Lucius doesn’t conform to conventions, although I promise, they will get their Happily-Ever-After. In fact, Chalice Bearer: Thornraven, Volume 1 is designed to fulfill the promise of the other seven books, although it is not the final book in the series.

The Twelve Systems Chronicles are my first set of stories. For the series, I researched martial arts and weaponry as well as crystal computing. Swords and other blades haven’t changed much in centuries. Crystal computing, on the other hand, changes almost daily.

Book specific research takes me to all sorts of interest places. Transgressions: The Apprentice, Volume 3 required research into geological formations that I revisited when writing Chalice Bearer: Thornraven, Volume 1 (release date: January 21, 2020). In Serengeti Valor: The Apprentice: Volume 5, I went to a primary source for technical advice on battle tactics – my dear husband served in the marines. Nightingale: The Apprentice, Volume 6 needed a slow-acting, readily curable poison. On a lighter note, Lilian does get to attend fancy parties in several volumes. When I need inspiration for gowns and other high fashion, Vanity Fair is a go-to, as are all the shots of various red-carpet events. 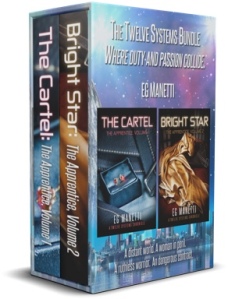 If it is okay, I would like to use the words of others.

The two volume, Twelve Systems Bundle: The Cartel & Bright Star is a 2019 Paranormal Romance Guild nominee for a Reviewers Choice Award. From the PRG 5-star Review:

“Lillian is brilliant. She is fierce and smart and vulnerable and endearing. She has an inner resolve that is enviable. Her confusion about her feelings for her Monsignor is so relatable and real. I am
well and truly invested in her.”

The series also has four crowned-heart reviews from InD’tale and has three times been nominated for a RONE with two books becoming finalists. From InD’tale: With characters that jump off the page, love that is forbidden yet unstoppable mixed with top-notch worlds and technology, sci-fi has never looked so good or become so addictive!

Any of my social media accounts will find me, although I tend to be a bit faster responding to Facebook and website comments. I also have a monthly newsletter, Red Gems, where I provide updates on promotions, progress on upcoming releases, and personal appearances. You can sign up here! 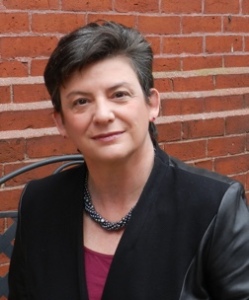 EG Manetti has always enjoyed a vivid imagination and occasional scribbling. In 2010 she was struck by the inspiration for The Twelve Systems Chronicles. The draft of a single novel soon became three, and then more. In 2012, after several hundred thousand words, The Cartel: The Apprentice, Volume 1 was published, followed by six other volumes. The latest, Chalice Bearer, releases January 21, 2020.

A former information technology project manager, EG writes as often as possible, cooks exceptionally and gardens adequately. She resides in Florida with her beloved (and often confounded) husband and their severely OCD Jack Russell Terrier.