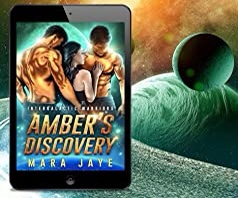 The Adventures of The Everyday Fangirl welcomes author Mara Jaye to talk about her newest sci-fi romance novel, Amber’s Discover.

Welcome Mara to The Adventures of the Everyday Fangirl and thanks so much for taking the time out your busy schedule to help us get to know about your newest book, Amber’s Discovery.

The title, Amber’s Discovery, is important because Amber discovers three aliens in a field near her house. Then, she learns the two sexy government agents on her doorstep and investigating the aliens are literally from out of her world.

I love naming my characters. The heroines’ names just come to me like I’m remembering a friend. My alien heroes get strong alpha names. I wanted the alien names to seem familiar but be different. I have fun naming secondary characters, too and try to go with what the aliens would be comfortable pronouncing. As in, an amphibian woman easily says her name, Rrrip, like any frog would. Kot’s name is a short bark befitting a canine humanoid. Then, there’s Fizz, the reptilian man.

I’d been interested in writing romantic science fiction since the early 2010’s but after reading Ice Planet Barbarian, I knew it was time to let my own alien stories shine.

Part of remaining sane is remembering not everything needs to be or can be done at once. I’m not a patient person and the entire process can seem to take forever. I like writing about alien men who can think faster because of tech and just mentally send commands to their devices and spaceships. If I didn’t have to say, “Hey, Google,” so often, it’d be cool.

Oh gosh, I’m not my characters and they are not me but we do have a lot of similarities. I tend to joke around or talk too much when I’m nervous and I know Amber does that. She’s also one to need alone time when angry but we can be sure she’ll come back and forgive everyone. Then, I tend to be like the heroes sometimes in that I want to help everyone, even if it’s not the best idea.

Well, I always think a book will be easy because it’s set in the here and now, but then you have physics which messes everything up, lol. I absolutely love science and keep up with the earth and biological sciences. It helps with creating new worlds and inventing new problems to shove my characters into. Today for a current book, Nicole’s Prisoner, I needed to look up if we still used hydrocarbons for making water bottles because manufacturing processes change all the time. I’ve also had to research if life can evolve on a planet without seasons, it can’t, and what sunsets look like in other atmospheres.

So many things as long as it’s not mean or cruel. I don’t laugh when a person falls but will when they struggle in pulling a door meant to be pushed. I’ll also laugh when I pull the push door.

I’m not a crier, but, my husband and I were in a store when I saw an employee working, shopping for delivered and/or pick up groceries. Seeing them reminded me of the early days of the pandemic and how brave all of the people still working in the stores and hospitals were. I grew a little teary eyed at how many people are still here and how many people aren’t any more. We’ve lost friends and family members. It’s tragic.

Okay, I try not to gush because when I do, other writers I fangirl are all, “Ew, go away.” Hurts a gal’s feelings, you know? But, I absolutely love Ruby Dixon’s work. I was asked to be in a shifter anthology under another pen name and was eh about shifters. I thought I’d at least try to read a shifter love story, found Ruby’s Dragons series and there you go. Loved the dragons. I’ve read every one of her books, devoured them, really. I shamelessly say I wish we were best friends. How is this fangirl devotion reflected in my writing, though? Due more to Star Trek’s Alien of the Week but like Ruby, I tend to not invent new aliens unless I have to. I don’t want to keep track of dozens of aliens’ culture, world, and appearance. The romance is the focus, after all. I also thought about giving my guys a bright or primary school color but wanted them to be my aliens and original.

Let’s see, between this name and my other pen name, I’ve written at least thirty-five books but Amber’s Discovery is my first menage. I was really nervous writing it, wanting to be true to the characters and their relationship dynamics. Writing the trio was interesting, fun, and a challenge that I’ll probably do again.

www.facebook.com/authormarajaye or https://www.facebook.com/groups/501213978241683/ are both great places. One is my page and the other is my Kinky Aliens group. I have a website, www.marajaye.com and my Amazon page is at https://www.amazon.com/Mara-Jaye/e/B07LB6CV3F

There’s also my newsletter at https://marajaye.com/newsletter-signup/

Mara has been a card-carrying member of several science fiction fan clubs for most of her life. From old school Star Trek and Twilight Zone to today’s latest and greatest, Mara has been fascinated by the rest of the universe.

Having found success as a writer in another genre, Mara decided to tell the stories about the sexy space aliens living in her imagination. Come along with her for an escape into a universe with intelligent, strong, and always sexy men from other worlds.