As I mentioned in a previous post, I received a special media pass to the Star Wars Rebels Panel, Season 2 Press Conference, which can be heard via Skywalking Through Neverland, and of course the premiere episodes.  Unfortunately, I was not able to make the Red Carpet Event to interview the creators and stars of the show.  However, Fangirl’s Going Rogue does have some great interviews from this event.

Fortunately, I was able to make the ‘Bonus’ Star Wars Rebels: Past, Present and Future Panel on Sunday Morning hosted by David W Collins with Dave Filoni, Carrie Beck and Henry Gilroy.  StarWars.com has a great recap of this panel and includes the concept art shown during the panel.

Here are my hopefully spoiler free thoughts on what I learned between all these panels and the Season 2 premiere:

1) Star Wars Rebels is going to continue to include humor, adventure, action and danger with a whole lot of character growth.  This combination works for me and what I have seen so far confirms this.

2) Darth Vader is defiantly going to be a force to be reckoned with as seen in the Season 2 trailer.

No further comments on my part are necessary.

3) There are not only some awesome female characters, Hera, Sabine and now Ahsoka, in the show, but there are some awesome women behind the scenes as well.  StarWars.com did an awesome interview with Athena Portello and Liz Marshall.

4) I am very happy to see the return of some of my favorite Star Wars The Clone Wars characters including Ahsoka, Rex, Wolffe and of course my husband’s favorite, Hondo! 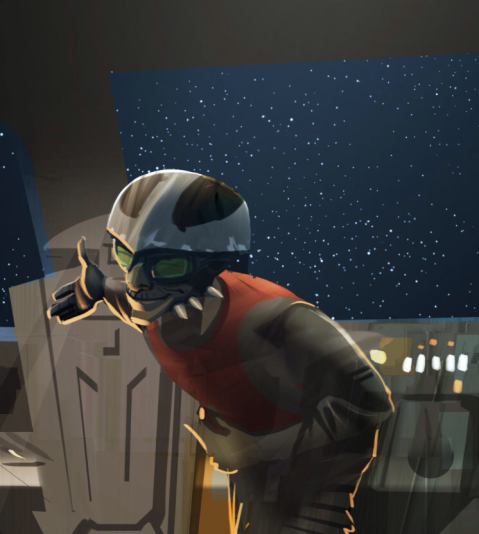 5) The artwork for the Star Wars Rebels may appear to be more cartoonish than Star Wars The Clone Wars to many people.  However, in my opinion, the artistic influence of Ralph McQuarrie and Miazaki, gives the show just what it needs to be a unique.  For instance, the vehicle shown below does not feel ‘cartoonish’ to me.

When the season 2 premieres June 20 on DisneyXD, then I will have a more indepth review of the episodes I saw and of course what this could mean to the future.

So are you looking forward to Star Wars Rebels season 2?