Interview with Hansi Oppenheimer about Squee!

Thank you Hansi for visiting The Everyday Fangirl blog and for taking the time to answer these questions.
What does the title of this documentary signify?

“Squee” is a sound some think fangirls make. At least that is how pop culture sees it. I chose it as the title since it’s the sound of joy and excitement and that’s one of the things I most love about fandom and fangirls in particular. Fandom is one place you can express your feelings – whatever they are – and show your passions and excitement. So I am calling the film ‘Squee’ because it’s all about Fangirls, their community, creativity and expressing joy.

What prompted you to create a documentary on this topic and who or what inspired you to?

I’m very involved in fandom & fan culture. My previous film, Color Me Obsessed, is an oral history of the the band The Replacements as told by their fans. The Village Voice called this unique take “the Rashamon of rock-docs.”  After Color Me Obsessed, I struggled with a film about fanfic for a while, but then I realized that my interest in it was because fanfic is primarily written and read by women.  I’m very interested in the creation of fanworks and transmedia, fandom as community, especially how women bond on tumblr, LJ and other platforms.

What are the most important attributes to remaining sane as a creator and how does your work reflect some of these attributes?

I think being an artist is all about accepting your own madness. Allen Ginsberg said “Follow your inner moonlight; don’t hide the madness.” Funnily enough, I met Ginsberg back in the late 80’s. I was briefly in the lock up ward with Allen’s lover, Peter Orlovsky. When Allen visited him, I asked him to sign the book I was reading. He signed it “Dearest Hansi, So Happy To See You Here” (signed Allen Ginsberg)”  Insanity and a sense of humor are the things that allow me to continue to make art.

I hope my work expresses my humor, a little craziness and my respect for freedom of thought. As JG Ballard said “In a completely sane world, madness is the only freedom.“

What kind of research did you have to do for this documentary and how is this different from others you may have worked on before?

First and foremost, I love listening to stories.
Mostly, I talk to people. I think everyone has a valid story to tell and I’m always happy to hear them.  When I’m not working, one of my favorite things is to sit in an “old man” dive bar and talk to the old regulars.  But I also do research all the time. My background prior to film was as a tape librarian. I’m a huge meta and aca-fan and I read tons of essays on everything pop culture related.

What are you a fan of and for how long?

I have a pretty dark sense of humor.

Buffy. Whenever I have a really bad day, I cue up a marathon and weep my eyes out and then I’m all better.

How would you describe yourself?

I’m an old punk rock chick. I worked on “zines’ back in the day and spent a lot of my youth at CBGB’s.
I’ve worked as a tape librarian, worked in the porn industry (in post production) been an actress in My Name is Earl, Blue Bloods, Nurse Jackie, Life on Mars, Californication, Law and Order, Brain Games, Dexter among other shows. I was the writer/creator/producer on Color Me Obsessed, I’ve taught kids how to make films at DCTV, work at the Tribeca Film Festival every year, worked with the Big Apple Circus, at Lincoln Center and The Daryl Roth Theater. I spend as much time at cons as possible and will be hosting a fangirl podcast on http://thesupernaughts.com/ in May.

When will the project you are working be completed?

Squee should be starting to “squeen” at festivals and cons in late 2015. 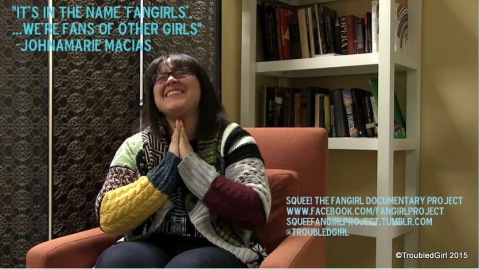 People can donate funds to help with our post production costs at gofund.me/squeefangirlfilm or help by liking and sharing our Facebook page at https://www.facebook.com/fangirlproject or our Tumbler http://squeefangirlproject.tumblr.com/ or follow us on Twitter @troubledgirl.